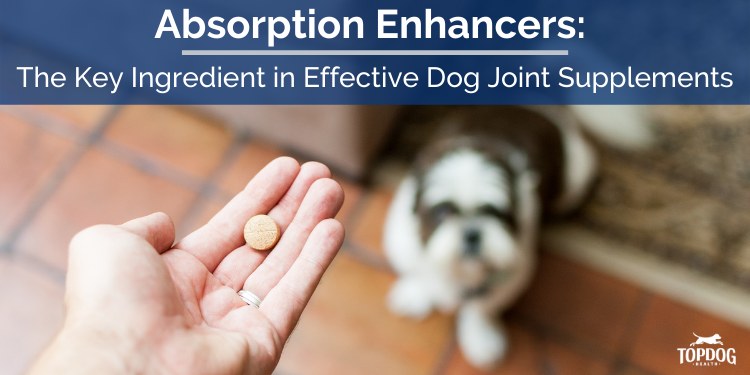 Nutrients in dog supplements are less absorbable than nutrients found in food, which is why you often see supplements containing astronomical amounts of vitamins and minerals.

Manufacturers know the dog’s system will only absorb a small fraction of those nutrients when they’re delivered on their own.

Before we get into absorption enhancers, it’s helpful to understand how the dog’s digestive system works. The system is made up of all organs involved in eating and processing food, starting with the mouth.

Mouth: The first stage of digestion begins, with food broken down physically by the teeth and chemically by enzymes in the saliva.

Stomach: Food travels through the esophagus to the stomach, where stomach acid further breaks down the food.

Large intestine: Any substance that has no nutritional value, or that was unable to be broken down and digested, ends up in the large intestine. This is where any remaining water is absorbed into the system, and the waste formed into a stool and stored in the rectum until it’s released.

The more nutrients your dog can extract from the food, the more digestible the food is. Dog food is considered highly digestible when at least 82% of the food’s volume is absorbed into the system, producing a maximum of 18% waste.

That means if your dog ate 100g of food, a high-quality, highly digestible food would result in 18g or less of stool.

Many supplements lack that complexity, instead containing very specific ingredients that are not as readily absorbed without the extra help of an absorption enhancer.
The difference this makes can be seen when comparing an orange to a vitamin C supplement. 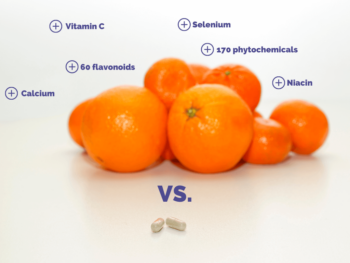 The vitamin C supplement may not have any helpers, resulting in a large amount of nutrients going to waste.

Examples of powerful absorption enhancers include:

Other ways to enhance nutrient absorption:

Nutrient pairs: Nutrient pairs consist of two components that work together to unlock each other’s strengths. Examples include:

While quality dog food can supply a good amount of nutrients that may be readily absorbed, it may not contain all the nutrients your dog needs to live his healthiest life. That’s where supplements can help with dog nutrition, but only if you opt for supplements that actually work.

The most effective dog supplements will contain the nutrients your dog needs, along with components that help your dog’s system access those nutrients. Now that you know what to look for, you can narrow down your selection to supplements that have the right ingredients and proper absorption of nutrients for the most powerful results.

If you’ve found that other joint supplements have not helped your dog, give TopDog’s products a try, not only are they formulated by a veterinarian who understands the complexities of the canine digestive system but all our products are backed with a Money-Back 100% Satisfaction Guarantee meaning you can always shop worry-free.