Dog Splooting: Cute Dog Stretching or Cause for Concern? 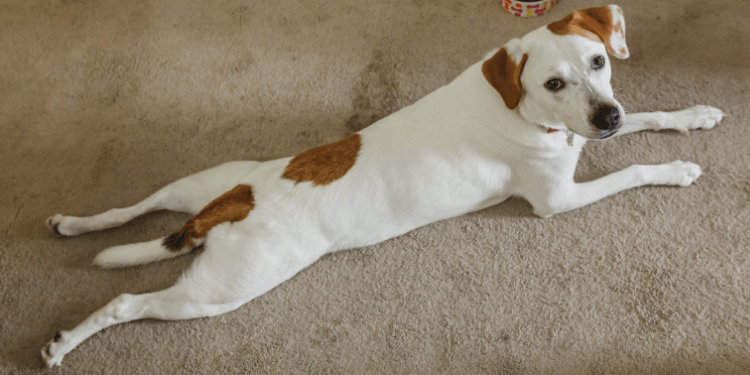 Dog Splooting: Cute Dog Stretching or Cause for Concern?

Dogs are prone to amusing their owners in so many ways, and one of those ways is with a pose that’s become known as splooting. Dog splooting is a position where your dog lies on his belly with one or both legs stretched behind his body. While many pet owners find this pose adorable, there may be certain cases where it may be a cause for concern.

Corgis are well-known for their splooting talents, although all dog breeds – and even cats – have been known to achieve the position. Depending on their level of flexibility, some animals may engage in variations of the pose.

The full sploot: The most common dog sploot, this position involves the dog stretching both hind legs behind his body. It’s especially common with corgis, Chihuahuas, and other short-legged breeds. 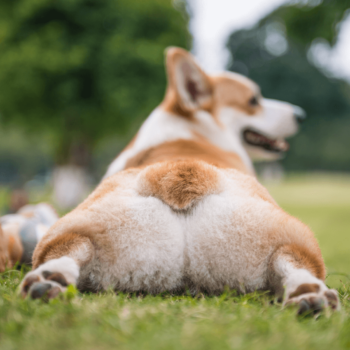 The half sploot: This position occurs with the dog stretching one hind leg straight back while tucking the other under his abdomen. One of the dog’s hips may be on the ground. German shepherds and larger breeds often engage in the half sploot. 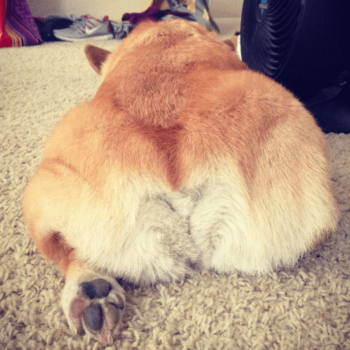 The side sploot: In this pose, the dog sticks one hind leg out to the side while his other remains nestled near his body. 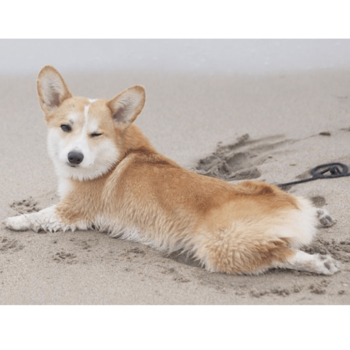 As the popularity of dog splooting has increased, so have the number of alternate terms used to describe it. You may find the position referred to as:

In many cases, there may be a simple explanation as to why dogs sploot: it feels good. The position may be comfortable and even beneficial to your pet. Your dog may engage in the position because:

It provides a full-body stretch:

Splooting can be ideal for dogs that enjoy a full-body stretch that involves completely extending their legs and hips.

Dogs like to find the most comfortable positions when sitting or lying around. This pose may be one that provides it.

If dogs feel overheated, they may attempt to cool down by pressing their belly to the ground. Splooting gives them the ideal way to get full-body contact with the ground.

Some younger dogs may have great flexibility in their hips and legs. Splooting may be the natural outcome of a flexible stretch.

When Splooting is Cute

Typically, splooting is neither harmful nor a cause for major concern. In fact, the position may actually help dogs relax their legs and hips while stretching other muscles throughout their body. It can also be a beneficial way to cool down, especially during warmer months. Some dogs particularly like the feel of cool tile or ground against their bellies.

When Splooting May be Cause for Concern

In certain situations, dog splooting could be a concerning behavior, indicating that your dog has uncomfortable hip and joint issues. The sploot type of dog stretching may be helping to ease the discomfort. This can be the case when a dog suddenly starts to sploot following an injury or as he’s getting older.

In such cases, splooting may be related to:

To determine if your dog is splooting for fun or because of an underlying condition, a trip to the vet is a wise idea. You can also keep an eye out for symptoms that typically accompany the conditions noted above. They include:

You can also look for signs of joint discomfort, which include:

What To Do If Concerned

A consultation with your vet is always a good idea if you have concerns about your dog’s health. This can help pinpoint any underlying problems while providing a plan of action moving forward. There are also additional actions you can take that can not only help support healthy joints but can likewise enhance your dog’s overall quality of life.

Soothing joint aches and pains are the first steps. Alleviating pain can reduce the number and severity of related symptoms your dog may be experiencing. It can also help him become more active, which plays a role in achieving and maintaining a healthy weight.

Maintaining a healthy weight is vital for the good health and longevity of your dog. Excess weight on the joints burdens them with excess stress. Regular exercise tailored to your dog’s age and abilities is a key component for keeping your dog fit.

High-quality dog supplements can help with the game plan for soothing, healing, and supporting optimum joint health moving forward. You’ll find several at TopDog Health & Rehabilitation, specifically those designed to naturally reduce inflammation while revitalizing and supporting the joints. Healthy joints contribute to an overall healthy life, making it possible for dogs to sploot, because they want to or can, not because they must, to alleviate pain.

How to Make Your Next Vet Visit Less Stressful
July 1, 2020

How Dogs Can Improve Your Mental Health
May 5, 2020