A femoral head osteotomy also referred to as a femoral head osteotomy or FHO, is the surgical removal of the head and neck of the femur. In simpler terms, it is the removal of the “ball” part of the ball-and-socket that makes up the hip joint. This way, the bones of the joint are no longer in contact, which eliminates the pain that is caused by the abnormal contact of the bones in a dog with hip dysplasia or severe osteoarthritis. This procedure is usually used as a last resort or salvage procedure in dogs with severe hip dysplasia that are not candidates for a total hip replacement. It is also used to treat dogs with Legg Calve Perthes Disease. Once the femoral head and neck are removed, the surrounding muscles and developing scar tissue work to support the area, and act as a false joint. This means that now when the limb is moved, the forces are transferred to the pelvis rather than the leg itself. FHO surgery is a fairly simple procedure in that minimal equipment is required, and no implants are needed. The procedure causes the leg to be slightly shorter than the unaffected leg, although amazingly, most dogs return to close to normal activity after the surgery.

In many cases, the goal of the FHO procedure is to relieve pain associated with hip dysplasia, rather than create a joint with completely normal function. Therefore, while there are no specific weight guidelines for the use of an FHO, smaller dogs typically have a better outcome since less stress and force are carried on the false joint than would be in a large breed dog. That being said, this procedure may be indicated in large and giant-breed dogs in which other treatments have been ineffective or are not feasible, and can dramatically improve the quality of life in dogs with painful arthritic hips. Additionally, the best results are usually attained when done after the animal is skeletally mature and has finished growing.

FHO surgery will relieve the pain that is caused by hip dysplasia, and you may notice that your dog seems to feel better rather quickly. But it is important to note that following FHO surgery, your dog may always have some degree of lameness, even when proper rehabilitation is done. This does not mean the surgery has failed but is because your dog is no longer working with a correctly formed joint, but rather with a false joint and a slightly shortened leg, and so the dynamics of the hip have completely changed. Although some degree of lameness may still be present, it will most likely be a huge improvement over the dog’s gait before the surgery. RETURN TO TOP 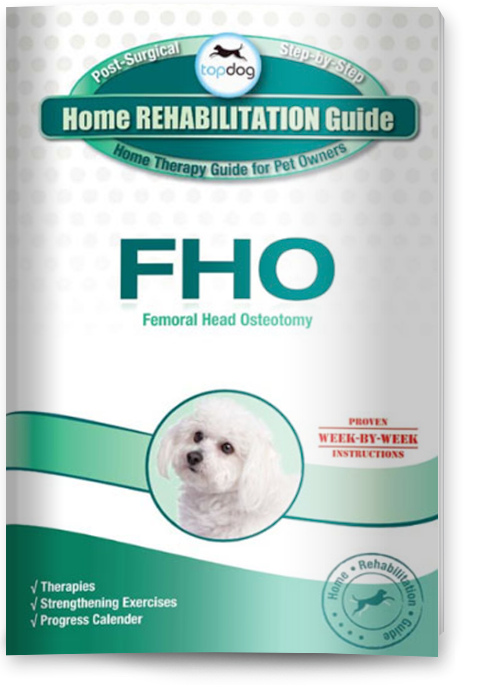 What is the cost?

The cost of an FHO ranges from $1,200 to $2,500. The exact cost will depend on the area you live in, as well as the hospital in which the surgery is performed. Typically, the cost includes not only the surgery, but also pre-surgical bloodwork, anesthesia, post-surgical care, and medications. Some hospitals may even include post-surgical physical therapy. RETURN TO TOP

What are the alternatives?

As previously mentioned, FHO surgery is often considered in cases when a Total Hip Replacement is not feasible. FHO as a treatment for hip dysplasia is generally performed in mature dogs. In younger dogs with hip dysplasia, other surgical options include Triple Pelvic Osteotomy or Juvenile Pubic Symphysiodesis (JPS). However, JPS surgery is only performed in puppies less than 20 weeks old. When it comes to hip surgery, the size, weight, and age of the dog are very important factors in deciding how to proceed. Most general practitioners can perform an FHO, meaning that referral to an orthopedic surgeon may be unnecessary. Therefore, FHO is a viable option for the treatment of hip dysplasia when finances are a major concern. RETURN TO TOP

What you need to know about recovery?

Despite the lack of a normal hip joint following FHO surgery, most dogs do surprisingly well after the procedure, but results can vary depending on the patient’s size, and post-operative rehabilitation. Unlike many other orthopedic surgeries, with an FHO, the dog should be encouraged to use the leg immediately post-op in a controlled manner. This is important because the dog now relies on the surrounding musculature to support the hip; if the dog is not weight-bearing, resulting in muscle atrophy and shortening will greatly increase the time of recovery and decrease the chances of a desirable return to function. According to Michigan State University, dogs having FHO surgery will usually toe-touch in about 10-14 days, and are partially bearing weight in 3 weeks. Usually, they are actively using the limb in one month, but it can take up to 6 months before complete healing and function are evident. RETURN TO TOP

What are the complications?

Every surgery comes with a risk of complications. With FHO surgery, the most common complications encountered are decreased range of motion and mobility in the leg, muscle atrophy, loss of function, and infection. However, with aggressive post-operative rehabilitation under the guidance of your veterinarian and/or rehabilitation therapist, the chance of these complications is greatly reduced, and most owners are happy with the outcome of the surgery. RETURN TO TOP

0
0
Your Cart
Your cart is empty
Continue Shopping
Products you might like
Calculate Shipping
Apply Coupon
×
Why Choose to Autoship?