There is no doubt that all of the scientific terminologies can get very confusing for any pet owner. Currently, there are three main surgery techniques that are commonly performed to treat dog ACL tears. Here they are:

On this page, we are discussing what is commonly referred to as the Lateral Suture Technique or Extracapsular Repair for the treatment of dog ACL tears.

This is the most common surgery performed for Dog ACL surgery. Actually, there are many different names for this procedure, but these are just a few of the most common. Essentially the concept for the surgery is very simple, to stabilize the knee on the outside of the joint by using a single fiber plastic line called a mono-filament. This very strong suture or the line outside of the joint re-establishes the stability of the joint needs when the ACL is torn. This suture is essentially placed in the same orientation or plane that the original ACL ligament was, except it is placed on the outside of the joint. During the surgery, a hole is first drilled through the front part of the tibia (shown above). Following this, the suture is looped around the small bone called the fabellar bone (also shown above) on the backside of the femur and continued alongside the knee, through the drilled hole in the tibia, and then it is clamped together with a stainless steel clip. Generally, this surgical technique for the repair of ACL surgeries is recommended for dogs less than 50 lbs. That said, thousands of dogs every year who weigh more than 50 lbs also do extremely well with this type of surgery. RETURN TO TOP 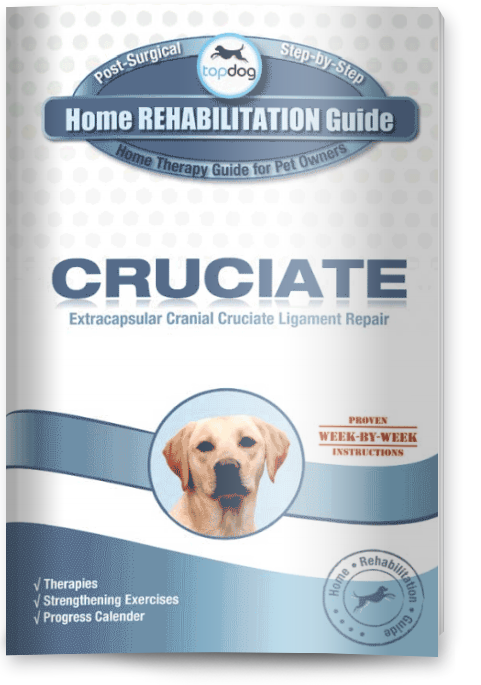 What Is The Cost of Dog ACL or Dog Cruciate Surgery (Lateral Suture Technique)?

This particular technique for fixing a torn ACL in dogs is considered the most conservative of all the approaches. The most important thing is that it addresses the main problem with the dog’s ACL injury, it stabilizes the joint. Depending on who does the surgery, meaning a board-certified orthopedic surgeon vs. a general veterinarian who has experience with this surgery, the cost can vary significantly. The cost of dog ACL surgery is also to some degree dependent on geographic location. From TopDog’s research, this surgery for dog ACL tear can cost anywhere from $1100-2,500. Again it all depends on the region and who is performing the surgery. By far this is still the most cost-effective surgery to repair dog ACL injuries. RETURN TO TOP

Where Do I Find a Dog ACL or Dog Cruciate Surgeon?

Again there are many general practicing veterinarians who are skilled at performing this kind of repair for Dog ACL tears. If your veterinarian is not experienced in this surgery, you can visit TopDog’s Veterinary Surgeons Directory to locate a board-certified surgeon nearest you. RETURN TO TOP

What Are the Alternatives to Dog ACL or Dog Cruciate Surgery?

As discussed previously there are several alternative surgery options for fixing a dog’s ACL tear. The most common are:

Several things should be considered when choosing the right surgery. Here is a list of the things to consider:

Is Conservative Management a Good Option for Dog ACL Injury?

There is no doubt, no one wants their dog to have surgery. Not only do we not want them in pain, often many pet owners are scared about the risks of anesthesia and surgery itself. On top of that, with all the information on the internet, many pet owners are led to believe that conservative management is a viable option for the treatment of dog ACL injury. There is no doubt that in some situations, conservative management is a great option and in fact, in some cases, it is the only option. This is especially true for older dogs who tear their ACL and the risk of surgery or even the cost of surgery is prohibitive at this point in their lives. Here are the facts and something to consider when exploring conservative management as a treatment option for your dog. If your dog only has a partial tear and with the help of medications and natural joint support your dog uses its leg comfortably, then conservative management is a logical choice. The Key to Success for Conservative Management of dog ACL injuries is this:

**Important** Understand this important fact: Dog ACL tears are a structural problem, therefore surgery is the best treatment option to stabilize the joint and provide the most long-term comfort for your dog. It is always best to discuss these options with your trusted veterinarian. RETURN TO TOP

What Do I Need to Know About Dog ACL Recovery?

The first thing you need to know is that full recovery takes upwards of 6 months. No matter what anyone says, it takes 6 months to regain the strength and muscle mass in the surgery leg. It is amazing how quickly they lose muscle mass in the injured leg in such a short time of not using it. We also all know it is easier to lose than gain muscle. Most pet owners don’t relieve that it takes a while. That said, your dog is going to be doing amazing and walking on the leg well before 6 months. The reason why TopDog feels this is so important is that at TopDog our goal is two-fold really:

Veterinarians estimate that anywhere from 30-50% of dogs who tear one ACL will tear the opposite leg ACL within a short period. The reason why this number is so high is that many people don’t have an understanding of the importance of post-surgery physical therapy, therefore are not doing anything to strengthen the leg. TopDog is proving that this statistic is much less when the pet owners are educated and utilize the basic techniques of physical therapy. TopDog acknowledges that the information contained in the Home Rehab Guide for Pet Owners is no replacement for professional rehab therapy. RETURN TO TOP

What are the Complications of Dog ACL Surgery?