Dock is a three year old Lab. Just had his birthday on April Fool’s Day. On September 12, 2013 he had TPLO surgery on his right hind leg. He had struggled with lameness issues for a nine month period prior to surgery. We tried several treatment options to try to determine the cause of his lameness. If wasn’t until we had the knee scoped that a cruciate ligament partial rupture became apparent. He never did exhibit the defining ”drawer movement” symptom.

We were home for two weeks post op when I accidentally found the Top Dog Health site and the wonderful TPLO Home Rehab Guide. This was such an amazing resource. It reduced personal anxiety, gave forward direction, things to avoid and how to do exercises the correct way. The support videos were incredible. Best of all was the interaction with Dr. J when a setback occurred.  At this point we ordered the GlycanAid HA supplement. Dock has been on it ever since.

We have had our challenges trying to get in enough walking outdoor this winter. The snow in Dock’s yard was over three feet deep at its lowest depth for most of the winter. We have done a lot of the exercises outlined in the guide in our rec room. The bone in Dock’s leg was healed by our twelve week visit. Since that time we have seen a certified rehab therapist to further assist in Dock’s recovery. Walking incorrectly to avoid pain for those pre-surgery months led to some compensation injuries.

We had our final planned program visit on March 31, 2014. The veterinary therapist measured his legs, watched him walk, and trot out. He had met the goals on the Recovery Check List.  “He strides evenly, no sign of a limp. If you took him in obedience classes now he would win.”Yahoo!

Thank you Dr. J for all your help and for developing this great supplement.  It has made a big difference in Dock’s recovery and he is so happy he has now been cleared to have supervised play with other dogs.

Thank you so much! 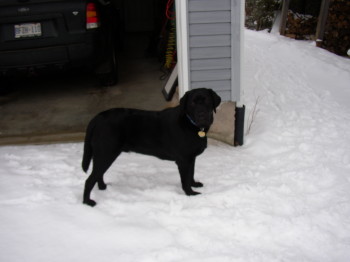