Back in June I contacted you about our 9 month Golden Retriever, Aspen, who was diagnosed with bilateral elbow dysplasia. Not a day would go by that she didn’t limp, and most days she would just lay around the house and not act like the playful puppy that she was. I asked for a suggestion on what joint supplements to put her on because the Glycoflex that our vet put her on was obviously not the answer. You had suggested another brand and Glycanaid HA. My wife and I decided to try the Glycanaid HA. Not just because of the excellent reviews it has received, but partially because of the honest response we got from you in recommending another brand as well. Well, here we are almost three months later and she doesn’t limp anymore. She is more energetic than ever, isn’t afraid to get off the couch, and even goes to hospital to visit sick children as a therapy dog now!!! We also take her swimming just as you had suggested. Thanks again for the honest advice and for the incredible supplement that has helped her. We know it won’t cure her joint problems, but it has restored a quality of life that she probably wouldn’t have had otherwise.

My wife and I can’t say enough about you and your supplements. Thanks again, Dr. J and Top Dog Animal Health and Rehabilitation!!!! 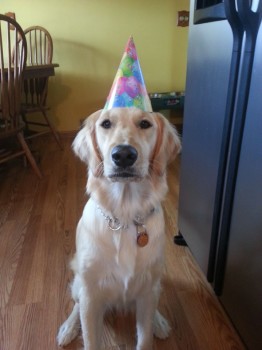